Meet the Crawley family - a very 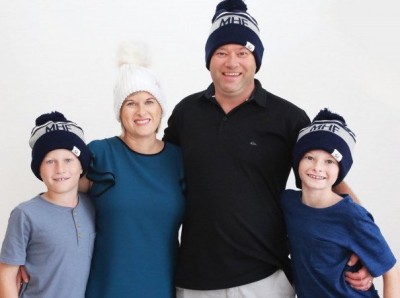 normal, tight knit family living a very normal life that takes a big U turn. This is an inspirational family built from quiet strength, humility and humanity and the glue that keeps it all together… love.

The words "inspirational" and “journey” are far too overused and watered down these days - but this “Journey" gives you a taste of the reality that most brain cancer patients live through. And this family truly is inspirational - though they would be the last to think so.

J is for Journey

There’s a lot of J’s in the Crawley family… there’s Jason (43), wife Jillian (43) and two gorgeous boys, Jackson (11) and Jacob (8). Boxing Day 2020 was to be the start of an exciting journey for the family. After a tough year of Covid restrictions, home schooling, lockdowns and limited access to friends and relatives the car and van were packed and they were all looking forward to hitting the road and escaping that year with friends and extended family for three whole weeks at their favourite holiday spot at Tuncurry. There were just a few minor details to attend to and then they would be on their way on a care-free journey to make memories.

Jason decided to drop his laptop back to the office at Newcastle Commercial Vehicles before he left on holidays. The boys would go along for the short drive to Beresfield from their family home in Ashtonfield, just north of Newcastle. They chatted to their Pop (Jason’s dad) on the car speaker along the way. As Jason turned the car into the street where his workplace was, something changed. He suddenly lost the ability to speak. The words wouldn’t come out and he felt the muscles in one side of his face drop. He knew straight away something was not right and his instinct was to stop driving. He pulled the car over immediately into the driveway of his his work and put the car in park. He remembers nothing from this point.

The two young boys then witnessed their dad have a seizure for the first time in their young lives and had enough foresight to hang up the phone from their Pop - who also knew something was amiss - and Facetimed their mum to say something had happened to dad and show her through FaceTime. Jillian recalls seeing Jason unresponsive and the boys reporting his arms were flapping involuntarily and something was coming out of his mouth. As Jillian rang triple 0 on another phone she relayed the information she gathered from what she could see and what the boys passed on to her and took directions from the emergency worker whilst the ambulance was in transit. She was instructed to ask her two young sons if their dad was breathing, if the handbrake was on and instructed them to turn the car engine off - which was still running.

That was just the beginning of Jason, Jillian, Jackson and Jacob's not so fabulous journey. Not the one they had planned on taking that Boxing Day.

Jason was rushed by ambulance to hospital where scans and blood tests failed to show any likely cause for the seizures. The ED doctor told Jason to see his GP, have an MRI and EEG tests but had no problem with the family going on holidays as planned - as long as he didn’t drive, followed up with the GP (who was on leave) and stayed close to a hospital. With the ED doctor’s approval, the holiday went ahead with Jason’s father towing the van. All the extended family were already set up at the holiday park and the Crawleys felt safe with their support. Jason showed no signs of the seizures even enjoying a swim, albeit quietly by the water’s edge.

On Tuesday December 29, three days after the first seizure, Jillian and Jason drove back home to see the GP as planned where his blood pressure was tested. It was high. Very high. He was placed on medication immediately and booked in for the earliest MRI in two days time. A blood glucose test was ordered to rule out diabetic seizure. Back in Tuncurry after taking the two hour blood glucose test locally, Jason is now hungry and shaky from the process. They decide to go to the beach with the boys where Jason, feeling dizzy still, stays close to the water's edge. As they sat in the sand with other family members, four days after the initial incident, Jason has his second seizure. Luckily an ED nurse was on the beach at the time and came to assist. Triple 0 was called once again and Jason was taken to Taree Hospital. After more tests Jason had his third seizure - this time they decide to keep him in hospital and conduct an MRI the next day.

On New Year's Eve 2020 the doctor arrives at Jason’s bedside with the MRI results. The news is not good. A lesion was detected on the left side of his brain. From this moment on this happy, tight knit, loving family’s lives changed irrevocably and their brain cancer journey had begun.

Jason was transported to John Hunter Hospital three days later where they are told by the surgeon a tumour on his temporal lobe is the cause of his seizures and it will be surgically removed in two days. At 3.30pm on Wednesday January 6 - 11 days after the initial seizure - Jason went into surgery. After four hours Jason was in recovery. The surgery went well, apart from his speech being slightly affected, and he was allowed home four days later.

Eleven days later Jillian and Jason, together with Alisha (the Mark Hughes Foundation Brain Cancer Care Coordinator), meet with the surgeon hoping for good news… but it’s not the news they wanted to hear. Jason has Stage 3 Anaplastic Astrocytoma Brain Cancer and will need Radiation and Chemotherapy. They can’t believe what they are hearing. Even the surgeon seems surprised by this diagnosis. Alisha makes an appointment for Jillian and Jason to meet the oncologist the next day and attends the appointment with them. Jason will need radiation every weekday for six weeks and will take a chemotherapy tablet every day for the 6 weeks followed by a break and another round of chemo.

Jason has now completed his first six week stint of ray and chemo and is currently working his way through 12 months of maintenance chemo. His recent scans look good though he will need regular scans to monitor progress and he is now finally back at work. Jillian and Jason, together with their gorgeous boys Jacob and Jackson, have tackled Jason’s brain cancer diagnosis with determination and positivity. Jillian says “Jason has been our rock. I’m sure he gets down at times with the heavy load he carries but he stays positive and is always looking to the future when this is all behind us. He has taken control of the things he can control - like diet, exercise, healthy living and a positive attitude - and accepted the things he can’t. The boys and I support him every way we can. I think it's true what they say - what doesn’t kill you, makes you stronger. Our family is stronger and we don’t take anything for granted anymore. Every moment is precious and we live life in the present.”

"One thing that stands out in the whole brain cancer Journey so far, is the invaluable help we received from Alisha, the MHF Brain Cancer Care Coordinator. We met just after the diagnosis. We were so grateful she was there with us. It was all very overwhelming… bombarded by medical terms, scans and tests, dealing with shock, disbelief and contemplating the future, wondering how to tell the boys, negotiating doctors appointments, dealing with side effects… Thank God Alisha was there to hold our hands. She would calmly explain everything, decipher the scientific language, answer our questions, book and attend appointments with us and act as our advocate. She was like a Brain Cancer angel that appeared right when we needed her. Now... she’s like part of the family.” said Jillian.

Footnote: Jackson and Jacob have been awarded a citation for courage from NSW Ambulance for their swift action. Listen to the emergency call here. Alisha is one of our MHF Brain Cancer Care Coordinators based at the John Hunter Hospital in Newcastle - a role that is fully funded by the Foundation. The MHF also funds Brain Cancer Care Coordinators in both Port Macquarie and Tamworth hospitals.