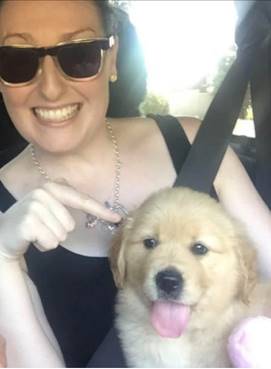 sister and daughter, Lisa, without breaking into a full face smile... with tears welling in their eyes. Just the thought of her, and the many images engraved into their memories, is enough to remind them of the pure joy she managed to extract from life and imbue in others. Read Mel's heartfelt story about Lisa - a  feisty ballerina who couldn’t help but help others... even when she was the one in need. By donating her brain to the MHF Brain Biobank she continues to help others and give hope for a cure for brain cancer.

G,day I’m Mel. I’m the proud older sister of Lisa Williams. Trying to write something that honours Lisa for all that she was is extremely hard and maybe that’s because there are no words that can even begin to do her justice. There are definitely no words that describe how desperately I miss her.

At 23 years old Lisa’s mortality was suddenly and unexpectedly confronted. After suffering from severe migraines for several days and with no amount of medication easing her pain, she went to the emergency department. Hours later, barely able to talk or walk she was told to go home and sleep it off. Lisa had always had an incredibly high tolerance to pain that was often attributed to her dedication and lifelong passion as a ballerina. Watching Lisa breaking in new point shoes was a particularly hard thing to witness. Her acceptance of the necessary balance of pain and pleasure required for such a demanding art form was inspiring. Ballet was her passion throughout her life and she delighted in instilling this joy of dance in so many people who she met along the way.

On this particular day though-the pain became intolerable. Whispering down the phone she said “Mel, something’s not right, it’s not right”. Panicked by this, I immediately comprehended the enormity of the situation. I told her to sit down, cross your legs and refuse to leave. As she turned to head back into emergency, she fainted from the pain. Dad carried her back in where she was told that she had most probably had a stroke. We found out afterwards that it wasn’t a stroke, Lisa had brain cancer.

The years seemed to pass in a blur of exploring various treatment, researching and grasping for any options to prolong her life. Throughout this process, Lisa had 3 major brain surgeries, 2 aggressive rounds of radiation and endless cycles of chemotherapy.

As my family and I struggled with the insurmountable anticipatory grief, Lisa remained the same.

Altruism; this single word is the only word that comes close to describing my beautiful little sister. Her innate quality to prioritise the needs of anyone she met over her own, the way she truly empathised with the feelings of others and took action to help where she could – all the while dealing with the reality of her terminal illness. This quality seemed to grow in determination and intention as her brain tumour relentlessly advanced.

Through my lens, I watched, helplessly as my vibrant, positive, caring, passionate sister was dealt blow after blow. Loss of license and independence, an occupation that she was equally passionate and skilled in, the security of a future ahead and the potential to fulfil her dreams.

Conversely Lisa maintained her calm, level, positive attitude. Lisa never spoke of her illness as a battle or a fight. Honestly she never even said “This is not fair”, not once- ever. Lisa refused to ever be seen as a victim. If and only if the topic of her brain cancer arose in conversation Lisa would simply say “Yep, I’m having treatment, it’s all good”. In fact, the closest that Lisa came to acknowledging the enormity of this devastating cancer was in a quiet passing comment made to me; “Honestly I’m so glad it’s me with cancer Mel, imagine how I’d be if it were you”. That wasn’t said with the intention of bravery or to deflect her real thoughts – she meant it with every bone in her body.

Lisa’s journey with brain cancer was really never completely focused on her beating cancer. It took on a focused objective of quietly empowering those she loved to gain clarity on what was most important in life. Her top priority was beautifully simple; to spend time with the ones you love. And she held true to this till her very last day.

Lisa declined her last round of chemo suggested by her oncologist (and friend). Not through despair and not because she had given up. She did it because she was grateful of the time she had left and wanted to spend every second of it with people she loved. Knowing what really mattered to her seemed to make this last choice an easy one.

The passion Lis had for dance let me see my beautiful little sister touch so many lives – it moved people. One of my favourite memories is when Lisa was putting on this concert and she had taught this amazing 18-year-old boy with a disability to slow dance to an Ed Sheeran song ‘Perfect”.  Lisa made sure he shone. That he was centre stage. I looked around and so many people had tears in their eyes. In that moment- I can’t describe how proud of her and in awe of her I was.

Lisa and I were at our happiest when we were front row in a mosh pit at a Screaming Jets concert. This was us. The jets were playing the day Lisa was due to finish yet another round of chemo. I didn’t think she would be up for it… I was wrong. That night out of no-where and without any warning Lisa jumped up on the stage in her Mark Hughes beanie and started pirouetting across the stage. Let me say, the security guard had his work cut out for him that night. Lisa continued to perform beautiful ballet moves across the stage. Everyone was cheering her on. I just stood in awe of her.

Lisa’s love for family is something we will cherish forever. When I was pregnant Lis had had already had brain surgery and needed to follow this with radiation. Lisa took this in her stride…until we realised that I was due at the same time she was supposed to have radiation and couldn’t be in close contact with a newborn!  Never one to shy away from a challenge Lisa contacted my obstetrician and, long story short, she negotiated that I would be induced a day or 2 earlier and her radiation pushed back 2 or 3 days. When my son was born, Lisa was there – just as she’d planned.

On the 11th of August at the Calvary Mater Hospice, the anticipatory grief that I had held tightly for 12.5 years left. In its place crept a debilitating and numbing sense of loss.

As I sit writing this, I can't seem to move past the last sentence I wrote. Something about it didn’t feel 100% authentic. ‘Numbing sense of loss’.  While I do still feel so much sadness and pain, I also feel love and appreciation. Throughout the last part of Lisa’s journey, I met someone, who, at the darkest point in my life, offered me a light. She provided me with a sense of control, inner strength and purpose. Her name is Cassandra Griffin and works as part of the MHF Biobank. Her support both emotionally and physically was truly humbling and allowed me to fulfil Lisa’s final wish. To donate her brain to the Brain Cancer Biobank in the hope that it could make a positive difference to others living with brain cancer. For that - I will be eternally grateful.

However overwhelming painful this has been, I feel deeply blessed and honoured that not only did I get to be a part of Lisa’s life with all its ups and down’s but also that mum and I were with her in such a sacred and intimate moment - holding her hand, and witnessing her leave the constraints of her body- and dance into the light.